However, in the end I did move into Rua do Agua (the road of water… ha ha very appropriate) before it got electrified. Unpacked the van into the cave-like living room, then dashed around town organising gas bottles for the hot water system and the stove, a new gas heater, a gaslamp and some spare batteries for my torch.

Planning to sleep there just the one night as I was staying with my portuguese family, (sorry Mike – your family who I’ve adopted!) over christmas so just planned to try sort power out later. Candles are good and they give off heat. Having hot water is a complete blessing, but no internet is a bit of a killer.

Anyway, having dumped stuff on the floor I only realised later that setting up a bed was not a good idea till I did a little cleaning – the cottage is a refurbished building, its been truly beautifully done, deep stone walls and a new, very well-insulated tile roof, but all the plaster work is still bare and the house was full of concrete dust. So not wanting to breathe it all in, I cleaned. Filling bucket after bucket with hot water, I mopped the tiled floor which was easily done, and dumped the muddy water on the cobbled road outside where it might do less damage than to a closed sewage system. After the second or third bucket of water, leaning on the mop admiring the almost full moon the day before Christmas, I heard the front door snick closed.

I felt a kind of empty hollowness as I heard that. They say your life flashes before your eyes – well, the house full of candles and a gas heater going full blast, every double glazed brand new window extremely tightly closed, and my keys, telephones (both of them), car keys, in fact most of my life, all flashed in front of me. Through the bloody kitchen window. The closed window.

Its funny, because I was in a strange space of complete awareness when this happened (this is obviously from the moment JUST AFTER I locked the door from the outside. A little mindfulness before that would have been just dandy.) I didn’t feel fear, although it occurred to me that I was at least 4 miles from the nearest town with a policeman or fireman or access to a lockpicker.

I didn’t feel cold although it was a chilly night, the sky had cleared and I was wearing quite a lot of clothes because the inside of the house was so cold. I wasn’t in the dark as the quiet tiny road I live on, has a couple of huge street lights at useful intervals. And the moon was almost full. I’d just had some hot tea.

Basically, as per the teachings, most things in my life were perfect if you looked at things a certain way – and just blanked out the bit about being locked out, in a foreign rural village at 11pm with all your neighbours lights off, who don’t speak english anyway.

OK OK I can hear the clamouring – break a window and go back inside. Well, the very strange thing, is that this simply did not occur to me. I wanted a person with lock skills, to open a door. Its not my house, and I didn’t even think of breaking anything to get my rapidly cooling body back inside. Is that a feminine thought pattern or just me?

Anyway, I’m not the brightest breaker-in, but I am pretty good at communicating. First I tried the house up the road with lights on – I could even see a huge TV screen with a tv game going on – but scream and shout, dancing all about, driving the guys 3 dogs absolutely insane with rage, could I get the guy to come check what was going on? No. That’s when I felt a bit better about security around here. Obviously terrorism and suchlike is absolutely no threat around here where a neighbour does not come out to see what his dogs were trying to kill because its obviously a boar or a deer or something.

So starting to get really worried about all the candles burning and the gas fire in the same room, I ran the other way, and while its a reasonable village, with quite a few houses, all of them were in total darkness. Most with shutters completely closed, and while that can just be portuguese winter night closing up the house, there were very few cars.

Then on a hill nearby I saw some lights and what was obviously a tv playing, a very distinct light pattern even at some distance! Madly running through my limited vocabulary, I knocked on the door at about 12 midnight. Vitor answered after a startled pause ( I guess no-one ever knocked on their door after 10pm before) and I just drank in the sight of a human being INSIDE a house. Using my most ready vocab, I asked if he possibly, just possibly spoke a little english – obviously not expecting a survey at this time of night, he actually smiled as he agreed that he did, just a little. I had actually rehearsed explaining my situation in POrtuguese – its amazing what the brain recalls under stress, but I didn’t need it thank goodness.

And from these small things are miracles born – I was able to explain my predicament, he laughed because apparently he did the same thing 2 weeks before, spoke briefly to his wife, got some tools from his open garage (there is NO security issue in this area), offered me a lift in his car (parked with the key in the ignition… I start to know how to solve my problems myself, if I do this again and Vitor is not home!), came to the cottage, broke through the small bathroom window which I being the yoga person then climbed through, and – how lovely – the warm kitchen with candles all politely glowing, the gas fire completely under control, the keys in the backdoor.

I had a big bottle of port ready for a christmas gift, so I grabbed that and gave it to him as he made a hasty retreat back to his warm house, and he was really surprised. If it happened to him, he expected me to help, and so it wasn’t a matter for thanks he said. Good people in this community.

So the story doesn’t actually end there – and I’ll tell it because I’ve found from other adventures that Vitor, while a hero for sure, is not unique. The next day I went off to spend Christmas with Manuela and Isabelina, and the rest of Mike’s family here in POrtugal, and only came back 4 days later. The broken window I left taped up with cardboard as security really doesn’t seem to be an issue around here.

Vitor popped in to check how I was doing, just after I got back. He told me again about a double glazing specialist he’d given me the number for who I hadn’t tried to call yet, and drove off. An hour later he came back with some tools and a bit of wood. We were taking the broken window in for repairs, apparently. The piece of wood didn’t fit (the windows are inset in the 50cm stone walls, any covering for the missing window would have to be cut to fit into the opening) so off Vitor went again. 20 minutes later he was back, with a clever setup to bolt the wood in place, removed the broken window, covered up the hole, and led me to his car (after checking I had my keys…!)

We drove to the glazing specialist, fairly close by, dropped the window, had a coffee, and were back in an hour. A small action on his part, but it truly made my month. Not only would I not have thought to break a window to get in, but I could have searched for weeks for a local glazier to fix the broken window, and not been able to communicate when I did!

A few days later he texted to ask if I was home. Sure I was – and next thing, he arrived – with some tools and the repaired window, which he kindly refitted. A real good samaritan. I even had to insist he told me how much it was, so I could repay the small sum of €20.

I don’t know how something like this would pan out in London – I’d probably knock on my neighbours house and they’d call the police or possibly a locksmith if they knew one. I don’t think anyone I know in London except really close friends, would dream of smashing a window to help me get back into my house, with every intention of making it good afterwards.

The reason I moved to Portugal and want to start a new life here, is that these kind of people exist everywhere, but in smaller villages and towns in POrtugal there are more of them, I know because I’ve experienced kindness and generosity here in huge quantities before. And this town is certainly not letting me down this time around! 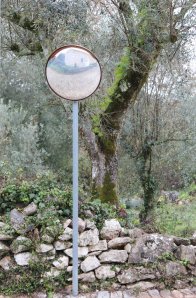 Cottage on a corner 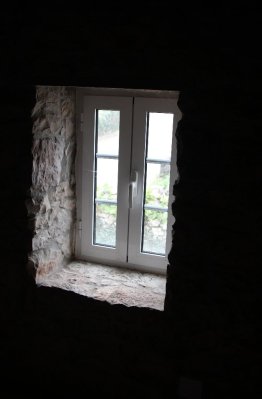