but since I’m on my way home to sunny South Africa for the first time in three years, to see the extended family including new members I haven’t seen before, I do feel kind of soppy.

Family are the people you get stuck with straight out of the womb – not much choice involved usually (well, they can chose to let you live at that point, or not, or if you survive early childhood you can chose to leave later and live in another country – which is NOT why I live in India). Through the actions of Mother and Father the Family provide health services like food, clothing, shelter, medical care and later education, but that’s really only a small part of it.

My family have been a constant inspiration to me on my journey. My dad is a great yogi – albeit that he’s possibly never studied a book or attended a class on yoga, he’s got It anyway. Many of his gentle asides from my unconscious teenage years now pop into my head – practical advice always – a biggie was to respect my Mother for the tremendous sacrifices she’s made in her life for us kids. (Actually, although its embarrassing to admit now, I did need to be told this at one stage – we all have bad patches, sorry to report!) 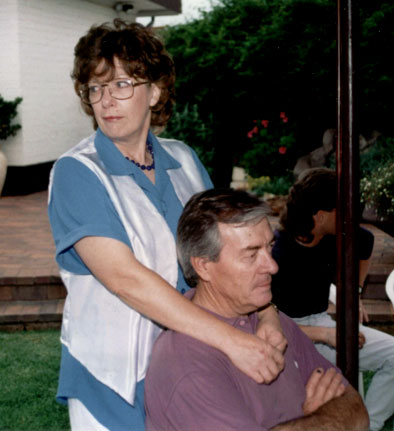 Dad always insisted we have a plan – even now he asks what you’re planning to do this year, and in 5 years time, and 10 too, and that will automatically drive your monthly, weekly and daily to-do-lists. I’ve seen plenty bestseller Self-Help books written around that wisdom but Dad said it first. The plans can all change of course, but without an initial plan nothing happens. Very true.

He has his adventurous side too though – whatever crazy scheme I have in mind, Dad always says to go ahead and try – do it, and not be in a sad position to regret the missed opportunity later. His experience is that we regret those things in life we missed, never our doings or even our mistakes, which only teach us what to do better next time!

Dad was a great warrior in his youth – a Tzar actually (I can’t say much on this subject, as I don’t know whether the statute of limitations is up, for all his escapades from those days). Apparently he played a robin hoodish role, selling protection from nameless dangers (like detentions) to the stupid, and the greedy, and employing the smart to protect him from same customers – sounds like training for a successful political career to me but sadly he’s never been interested in participating in government higher than the local Neighbourhood Watch committee.

For these sins of his youth probably (karma and all that), he was called upon to teach me to drive – now it all makes tremendous sense, to look left, right, left and right AGAIN at traffic lights, and then to check your mental radar before pulling off as the other guy doesn’t always obey road signals.

However, at the time, my driving was a source of much concern to him as I suffer Left-Right dyslexia – pity the traffic cop who took me for my first driver’s license attempt, and directed me to turn left (or right, doesn’t matter – the other way) onto a busy highway, and panicked (and was rather rude, actually) when I went My way.

Pity my younger Father watching this same confused girl around the same period, driving off with firm resolve to the mountains for a weekend away with equally crazy university mates as passengers in a car she won in a competition (No-one in their right mind would have helped me buy one at that time!). We reached our destination through the simple mechanism of not using the words Left and Right, people just pointed which way I was to turn – it still works better today.

Needless to say we (I) wrote the car off, same weekend, wasn’t a left and right problem though – rather a camel-man attempt to drive quickly, straight through a gravel bed on a fairly wide and sloping turn in the road – which was, must be mentioned, on the side of a rather steep mountain. All got home safely except the car which ended up tucked quite neatly into the side of the mountain, upside down. Pity really – it was a great car from the little I remember, that being the first time I got to drive it.

Thanks to those intense driving lessons, I now drive cars comfortably in India (!!), on the wrong side of the road in America, even on the M5 in London, on any road in SA, any vehicle, stick shift or automatic – but I still don’t really know my Left, from my Right. Dad still seems to love me though, and I think he’s allowed me to drive him. Maybe not actually, when I come to think about it – but he has allowed me to borrow the car. That’s what insurance is for, really.

So I am looking forward to seeing my Pops, and trying to persuade him to let me take him out for a drive. I have some good arguements to persuade him I’m ready – its occurred to me you don’t NEED to know your Right from your Left when driving – just follow those nifty arrows on the signposts, painted on the road, painted on barriers along the side of the mountain – its very easy to see which way to go, really. Actually very few roadsigns in the world actually use the words ‘Left’ and ‘Right’. Except No Left Turn perhaps — but I have a medical condition which precludes me from obeying signs like that..

Guess you won’t see me on the road in SA with Dad in the passenger seat then. Maybe next time.

As the girl in the picture, (the yoga mat in title is beside me silently projecting its approval), it is my pleasure to welcome you to my blog, where I’ll be recording thoughts on my path, and sharing some of the photographs from the Camera. This blog has eventualised from a ridiculously long discussion phase, I now consider myself a “Dilbert-trained Project Manager”: I know how to put things off until no-one really knows why we planned the project in the first place…

Talking about planning, there are many special friends and family who prodded me on the journey here, and suggested things – most of which I ignored, I’m happy that we each have to follow our own path – but I wanted to record that I appreciate their efforts anyway!

Thanks to Gabby, my angel, and Brad, for many things like a warm dry attic, and supporting the creation of http://www.wendyj.com, where the camera in the title will get to strut her stuff – actually, that website’s not live as this goes to press, but as Gabby and I discussed, one thing at a time, and I wouldn’t want my procrastination muscle to go into spasms.

Thanks to GAK and the little prince, my other family in London, their ‘Guest room’ always seems to be available to me at only a moments notice, and who serve the best cheese and wine in London – with the best company! They kindly insisted for the last 4 or 5 years that 30 000 images of India and Europe must be valuable and someone wants to see them! Well, now its 50 000 photos – and Gus, I still need to back them up!

Thanks to my folks, who are unremittingly, endlessly, generously fascinated by my wanderings and warblings thereon – as parents should be – but I know most are not. This blog is for them to share in my journey more regularly – So if my family back home can kindly connect them to the WWW without changing too many settings on the PC in the office. (Make sure Mom doesn’t lose access to her Windows Solitaire game, in which case I may as well never go home again.)

Thanks to Swami Govindananda-ji, a very special Swami in our Sivananda organization, and a much-loved all-round Wonderrrfull human Being.
He finally got online with his own blog recently, in spite of deep misgivings about what to say, technology, privacy, etc., etc., and I am deeply inspired by his courage to share.

Thanks to my well-adjusted, gorgeous, interesting and funny (not sure whether that’s Funny Ha Ha or Funny Peculiar…?) family whose presence in my life is a blessing most other people spend lives searching for. Because of all of you, I tell everyone I had a happy childhood – which is not quite finished yet, Thank you!

Thanks to Lauren, my Facebook friend ;-)) whose generosity in sharing her beach-house and Apple Mac (on which this is being typed) created the space for this blog to be born – and enable me to take a walk on the beach at sunset, teach and practice yoga every day, read all her books and some of my own, eat veggie (Blue Planet – Jai!!) when I’m not drinking chai, and generally chill out as one does in Goa!

Thanks to the two K’s, my darling blonde and brunette freundins, whose unfailing faith in me and immensely practical advice comes through the ether, email and phone, as voices in my ear, sounding like the little Shoulder Angel – common-sensical words (KZa): “don’t like the look of that One no matter how gorgeous or spiritual he is!” (and she was right) or Kb’s instruction “Don’t let them take advantage of you darling – you’re worth your weight in Gold – well, my weight actually, its more!” [You’re lovely both of u!]

So many other faces come to mind as I sit in the starlit evening breeze on my little porch, thinking how divine the process has been – how so many wonderful people became part of my life during my travels, in India, Portugal, the UK, in SA, and in the online world of email.

Thank you all for just Being here, Being you, part of my life, on the Path with me and in the World making things happen, Being difficult or loving – I love it all. This starts to sound like a Christmas card poem, but I would not be in this chair, relaxed and happy, if it weren’t for all of you. The lessons you’ve taught have given me courage and curiosity to move on, patience with the world and with myself, and the strength to accept reality but to still hope for a better world, someone else said it better: